The Meaning Behind Your Favourite CNY Dishes

Have you ever been puzzled by the names of Chinese New Year dishes? What does “Buddha Jump Over The Wall” mean? How about Yu Sheng? Many say it’s a Singaporean dish! Read on to find out the meaning behind four iconic CNY dishes that you will most definitely encounter.

The story of how Pen Cai came to be has two variations. In the most often told version, a king escaping the mongolians in war arrived in a village that did not have cutlery to serve him. Thus, the villages put their most lavish dishes together into big wash pots to serve him. Head over to our Vegetarian Pen Cai description for more details on this delicacy.

For thousands of years, this dish was made of raw grass carp and eaten with vinegar sauce in China. It was later brought over to South East Asia by Teochew and Cantonese Ingredients. In 1964, “Four Heavenly Chefs”, known for being disciples of a famous Hong Kong chef, reinvented the dish by adding radish, carrots and peanuts.

As the story goes, and you probably guessed it, it became a trend in Singapore ( which is where they set up their restaurant at) and is celebrated with the famous “Lo Hei” tradition. All participants take turns to throw up the ingredients in the air and wish each other with auspicious phrases that are symbolized by its components.

This glutinous cake gained its popularity for the puns played with its name. “Nian” meaning sticky, also sounds the same as “nian” for year and “Gao” represents both cake and “high”/ prosperity.

Legend has it that Emperor Wu in SuZhou, once instructed his people to build a wall with bricks made of glutinous flour. They ate in hard war times and the people continued with eating it to commemorate him after.

Buddha Jumps Over The Wall

This dish holds a spot in the Book of Guinness World Records for being the most expensive soup ever at $200. It is not hard to see why when you consider that it takes three days to prepare with rich foods such as shark fin, abalone etc. But, the name is a puzzle in itself.

Apparently, a scholar once placed all his food in a clay jar (typically used for wine), and cooked it over an open fire. The aroma soon drew the attention of monks at a nearby temple who jumped over the wall to get to it!

And there you have it, the origin and meanings behind your favourite CNY dishes! Have a Happy Chinese New Year and don’t forget to check out our Vegetarian Pen Cai if you haven’t yet! 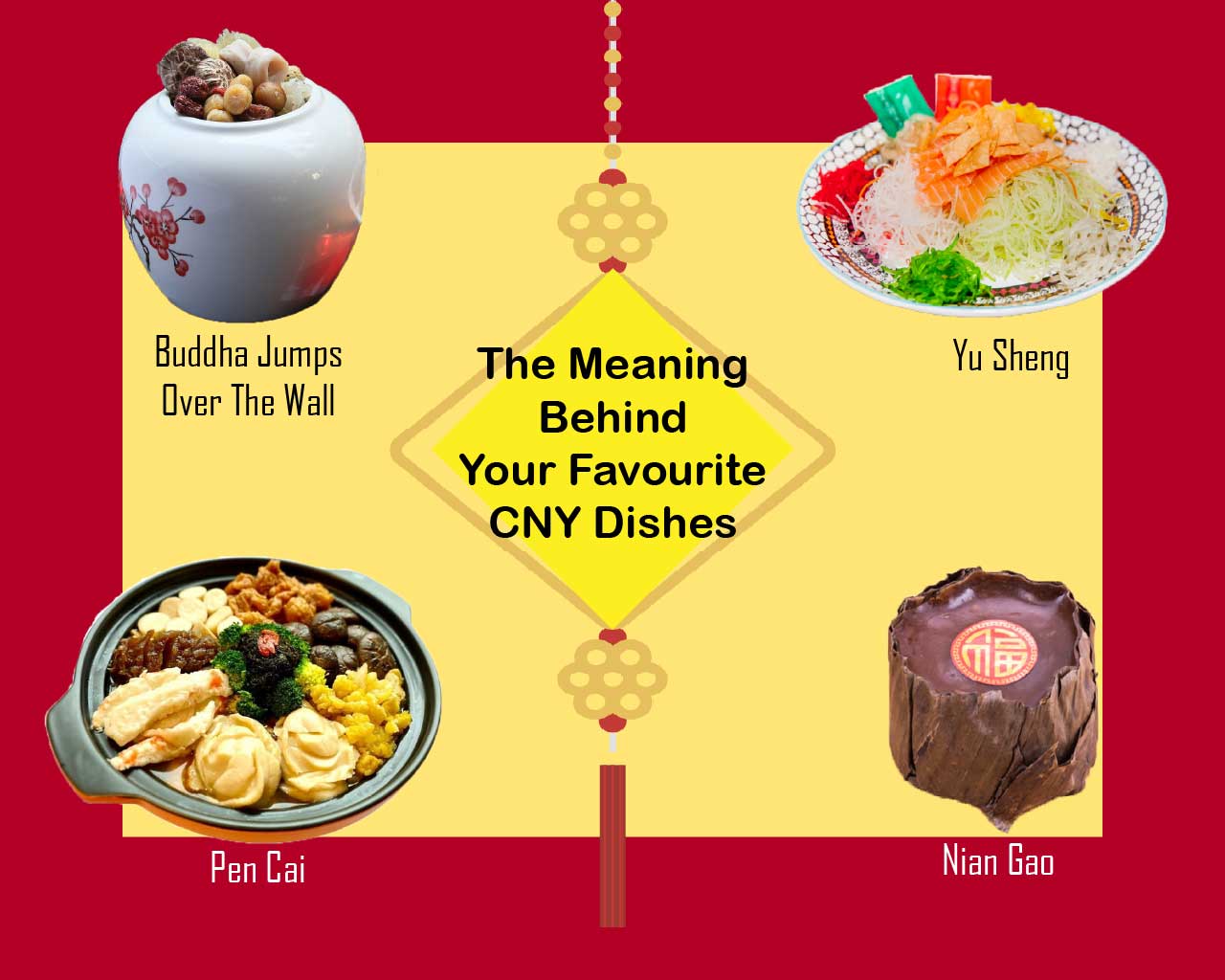 The Meaning Behind Your Favourite CNY Dishes

For purchases $25 and above